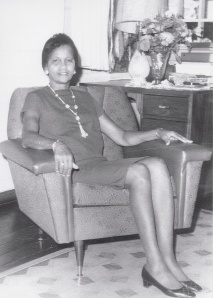 The fondest memories of my great grandmother were when I was in Guyana. I lived with her until I was about 3 years-old. She cared for me, loved me, and provided a stable home for me while my young parents worked to bring me to America. Then she came from London to live with us when my sister was born; I was seven. Her baked-goods of pineapple and coconut tarts warmed my belly almost every week when I arrived home from school. She was a staple that I took for granted; a little bit of Guyana was placed in our new American home. I learned how to bake from her; watched her favorite soap operas with her- One Life to Live and General Hospital; and I first learned about the bible from her. Every Sunday I would try to  squirm away from having to read the bible stories she was trying to teach me. Even though I loathed it at that time, it still resonates as one of our most tender moments. 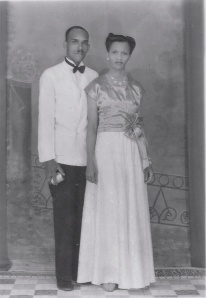 I was never able to have that bond with my grandmother, who was her daughter, because she died from breast cancer when I was five. She was the only maternal grand parent I had to cling to; so when the call came this week that she had passed, I was crushed. She was known as “Mums;” a caretaker to many. That was her knack, to care for children. Mums traveled far and wide to care for her extended family’s children.  Her benevolent spirit always filled every home she entered. Unfortunately, when I was 16, Mums broke her hip and was forced to go live with her only existing daughter to be cared for.

Our bond was something special because I was her first great-granddaughter. I was a rebel against her old school ways, but I was also her little friend. I kept her company most of the time because my parents were hard-working immigrants. She, too, was in a foreign place with not many friends; separated from her sisters, brothers, and friends who were scattered throughout America, Guyana, and England. However, I was her little helper in the kitchen and  her t.v. companion. I still remember her powdery smelling perfume and her slightly grayish-colored eyes. As I reflect back, she was more important than I realized. She was my mom when my mom was working late; my protector and one of the loves of my life. I will miss her, but I know she lived a good life. Everyone hoped she would make it to her 100th birthday on December 25th, but I guess God couldn’t wait to have one of his angels back. Love you, Pearl “Mums” Luthers.

6 thoughts on “My Beloved…”