During the time I was going through my interview process for the job I was contemplating in Baltimore, I would always see this store front window as the taxi would drive me to the train station for my departure.  It grabbed my attention because it was the only thing on the historic Charles Street that exhibited any type of nouveau flair. Because of my love for fashion, I always wondered what was inside the store, whose window display had boas, couture-styled mannequins, and the stenciled name, “The Doll House”.

A few months later after my decision was made that Baltimore was my new home; one Saturday I decided to go find out. I arrived and the store was closed. A young store owner quickly opened the door and said they were having a trunk  show and to come back later. However to both of our surprise, we knew each other. The young woman was Natalie Graham, a girl who attended Hampton University with me years ago. I was elated because I knew no one in Baltimore and seeing a familiar face was comforting. I was also super excited to see that a fellow Hamptonian had achieved success with the opening of her very own boutique. We embraced and started chatting about how ironic that I chose this store, on this day to visit. She and I had a connection years ago at Hampton because we both lived in the same dorm and became captains of the step team in this freshman competition. She was from Maryland and I was from New York, which traditionally on Hampton’s campus are seen as rivalries; however we struck a mutual respect for each other and placed 2nd in the competition that year. That was the last time I had seen her and now here we sat chatting in her boutique playing catch up. 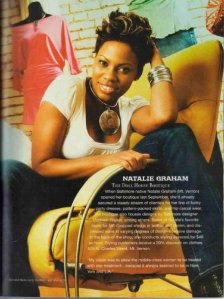 I don’t know what made me go to the “Doll House” boutique that day but I’m glad that I did. I was able to rekindle a friendship with a dynamic woman who has defied her odds, continues to challenge herself and achieve her goals. Natalie is not just a store owner but she is a designer of her own fashion line called Rag Dolls which mainly focuses on reconstruction and producing couture and one of kind pieces. Her corsets are usually on back order and her customers love her down-to-earth spirit which keeps them coming back for more. They just don’t enter the store for a quick purchase; they enter for the experience.

Natalie’s tenacious spirit keeps her thriving and she is coming up on her 6 year anniversary as a boutique owner. And anyone who is in retail knows that is a well-respected accomplishment. This year she has transplanted herself in Los Angeles to embark on a new chapter of her career. Already she has celebrity clients clamoring for her attention and she has only been there for a couple of months. She is one of my closest friends and also my August “Unveiled Beauty”. If she tells you her story, it is one of perseverance, self-belief, and courage. She is someone who should be always supported and acknowledged as paving the way for other young African-American women and designers. For more information on Natalie Graham visit her website @ www.dollhouseboutique.com or her store @ 525 Charles Street. 443-874-7900.